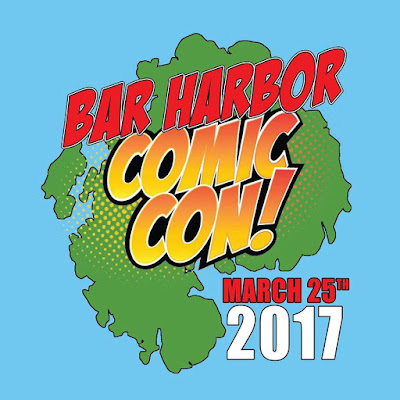 This Saturday, I'll be downeast at the Bar Harbor Comic Con. It's a one-day show to benefit a local charity, the Park Street Playground Project. It will be held at the Atlantic Oceanside Hotel & Event Center, in Bar Harbor, Maine.

I'm looking forward to it because it's turned into a reunion of sorts for the core creators of Alpha Productions, a small, independent comic book publisher that I worked for between 1990 and 1995. Publisher/owner Leni Gronros will be there with his replica KITT automobile from Knight Rider. Art Director Paul Pelletier, who has since gone on to a prolific career drawing comics for both Marvel & DC, will be there. Editor Bob Cram will be there with his novel The Monster War. and our Marketing guy, Rick Lowell, will be there as a dealer, Casablanca Comics.

Other guests include Gigi Edgley, the Australian actress who portrayed Chiana on the terrific space opera TV series, Farscape, and science fiction author Barry B. Longyear, whose short story, Enemy Mine, was adapted into a fun movie back in the 80s. There will also be  many other authors, comics creators, cosplayers and musicians.

It's a first-time show and a bit off the beaten track, so I don't know how it's going to go; I'm just looking forward to a fun afternoon with some old friends and new. If you happen to be in the area, come on over. It's for a good cause.

Posted by Christopher Mills at 12:07 PM