An Eye for An Eye 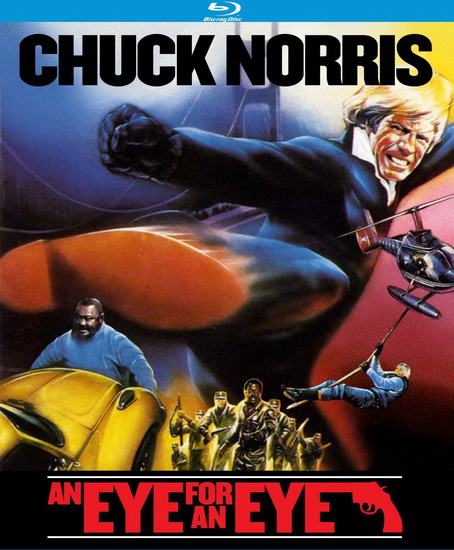 One of my favorite Chuck Norris vehicles has just been released on Blu-ray by Kino-Lorber: An Eye For An Eye (1981), directed by Steve Carver.

If I remember correctly, this is the last of the beardless Norris flicks (did he have a beard in the subsequent Silent Rage? Or just the 'stache? I can't recall).

Veteran exploitation director Steve Carver (Big Bad Mama, Jocks) worked well with Norris, playing to his leading man's strengths and shooting action scenes with a certain amount of clarity and style (They re-teamed on 1983's Lone Wolf McQuade with equally good result.) He also knew how to fill out the supporting casts with talented, veteran character actors, allowing Chuck to concentrate on the ass kicking while others handled the heavy lifting, acting-wise.

But it's a lot of fun, and very well directed and paced by Carver, with a standout (if too brief) battle between Chuck and wrestler Professor Toru Tanaka. The best part of this film, though, is the late, great Mako, who is in top form as Chuck's acerbic sensei.

The Blu-ray marks the first time the movie has been released in widescreen on domestic home video, and features an audio commentary by Carver.
Posted by Christopher Mills at 11:26 PM

People have either forgotten or don't care that the early movies of Chuck Norris were really fairly straight-up cop thrillers in which his main character knows martial arts rather than them being movies where martial arts is the main thing. I'm thinking of "Good Guys Where Black" which is a government conspiracy thriller and "Silent Rage" which is a slasher/sci-fi movie. Imagine if Chuck Norris was in "Halloween" instead of Donald Pleasence.