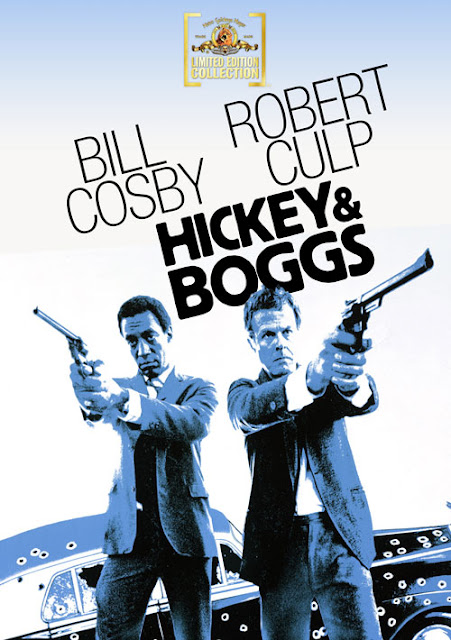 Finally! Never before legally released on home video (although there was/is a really awful unauthorized DVD floating around), Robert Culp's 1972 P.I. flick Hickey & Boggs, which reunited him with his I Spy co-star Bill Cosby, with a script by Walter Hill, is officially coming to DVD later this month, courtesy of MGM's "Limited Edition Collection" of Manufactured-On-Demand discs.

I've only seen about the last 5 minutes of it on cable TV in the mid-90s, and I've wanted to see the whole thing ever since. It's generally well-regarded by P.I. movie/noir fans, even though it was apparently a bit too grim and dark for audiences in 1972. I'm eager to get my hands on the movie - hopefully, it won't disappoint.
Posted by Christopher Mills at 12:48 AM

I suggest a shower after viewing. Or at least a bigger gun.

It's available for rent from Amazon for $2.99 if you want to get a sneak peek.

It's a terrific movie. I downloaded a pristine print from Amazon a year or so back....

I received the disc today. The transfer looks great - virtually blemish-free - and it's in its proper widescreen aspect ratio!