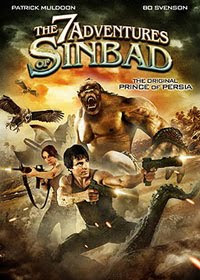 As some of you already know, one of my favorite fictional characters is the legendary Persian mariner, Sinbad the Sailor, from the Arabian Nights. Depending on when you ask me, 1974's THE GOLDEN VOYAGE OF SINBAD is likely to be among my top ten movies of all time, and I'm a big fan of most of the other cinematic voyages of the character as well. Hell, I even like the 90s syndicated TV show, and paid way too much to buy the Canadian DVDs.

So, when I found out that microbudget moguls The Asylum planned their own Sinbad film, to ride the coattails of this summer's PRINCE OF PERSIA, I was interested. Admittedly, I was less interested when I discovered that they were making a contemporary, 21st Century version of the character, but I was still willing to give it a chance. I'm glad I did.

THE 7 ADVENTURES OF SINBAD (2010) introduces us to Adrian Sinbad (Patrick Muldoon, STARSHIP TROOPERS), the young CEO of a major shipping company. When one of the company's oil tankers is hijacked by pirates in the Indian Ocean, his partner Simon Magnusson (Bo Svenson, INGLORIOUS BASTARDS) sends him out to negotiate. He arrives just in time to see a giant, tentacled creature drag the tanker beneath the sea before a storm crashes his helicopter. Soon, he - and a handful of survivors from his helicopter and the tanker - washes up on the shore of a tropical island, where a mysterious woman (lovely Sarah Desage) tells him that an ancient prophecy says that he must face seven trials and save the world. Then the island is revealed to be a gigantic monster.... and he's off.

Co-written and co-directed by Ben Hayflick & Adam Silver, THE 7 ADVENTURES OF SINBAD is definitely one of the better action fantasies to come out of The Asylum.

The filmmakers may have contemporized the story (including some uncomfortably timely stuff about crude oil spills) for budgetary reasons, but they clearly have an affection for the Ray Harryhausen classics of the 60s and 70s. The script is thin, but the performances are much better than usual for an Asylum picture, the Chris Ridenhour musical score is excellent, Mikey Jechort's cinematography is professional and slick, the Belize locations are lush and picturesque, and the CGI creatures are really quite decent - especially for (all together, now) an Asylum film.

The monsters - which include classics like a giant crab, a cyclops, a flock 'o rocs, etc. - may lack the personality and charm of Harryhausen's stop-motion beasties, but they're reasonably well-designed and animated, and much more detailed than I expected.

Muldoon, the latest in a line of very whitebread Sinbads, may lack charisma, but he acquits himself adequately in the lead, while Svenson seems to be a bit more animated than usual as Sinbad's treacherous partner. Sarah Desage is quite good, and makes for some sexy eye candy, as well.

I was quite pleasantly surprised, and would rate this among the studio's best productions. It's a surprisingly solid fantasy B-movie adventure with some decent production values and acting, and reasonably cool monsters. If you can handle your Sinbad wielding a machine gun instead of a scimitar, you might enjoy it.
Posted by Christopher Mills at 4:53 AM

I was getting excited for a while until the end when you mentioned Sinbad with a machine gun! lol

I've actualy been waiting for this one for a while. Thanks for the review. The trailer looked pretty good: http://www.theasylum.cc/product.php?id=170

The machine gun is just one scene.
It's set in the modern day. It makes sense in context.

Try to have an open mind, guys. Geez.