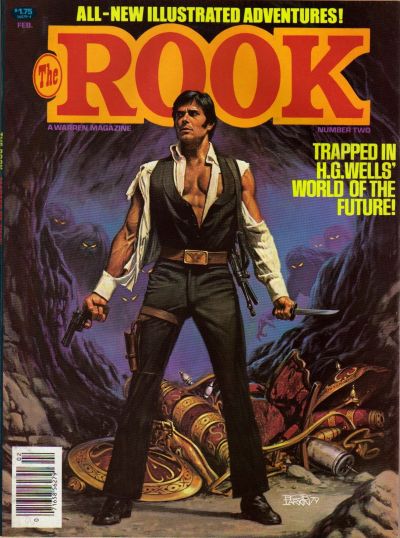 I came to Warren Magazines fairly late, not really looking at any of their titles until my late teens in the early 1980s. Of course, this means I missed the glory days of Creepy, Eerie, Vampirella and Famous Monsters, but I did buy and enjoy some of their odd twilight titles, like The Rook.

Created by writer Bill Dubay, The Rook was Restin Dane, a time-traveling adventurer descended from the unnamed protagonist of H.G. Well's The Time Machine. His nickname came from the shape of his vehicle, which resembled the titular chess piece. He dressed vaguely like a gunfighter (I always thought he looked like Han Solo, but sci-fi was pretty much my only frame of reference back then) and his adventures were pretty wild.

The cover to Issue #2, above, was painted by the great paperback cover artist Bob Larkin.

I read today that Dubay passed away on April 15th after a battle with cancer. He was a prolific comics writer and editor, with most of his work in the medium published by Warren, where he served as Managing Editor for a decade. He also worked in animation for many years. I can't say I know too much about the man or his work, but I know that his byline was on a lot of stories that I've enjoyed over the years.

That's a shame about Mr. Dubay, thanks for the info.

I'm not familiar with the Rook, Warren had a lot of cool books, I'm beginning to respect them more and more over time.

I always enjoy these heroic images.